Blog - Latest News
You are here: Home1 / SOCIAL MEDIA MARKETING2 / Why you need to be on the Clubhouse app and how to get started

There’s a new app on the block that has got everyone talking. The Clubhouse app is an invite-only and audio first platform that is about to celebrate its first anniversary in April. A baby in comparison to Facebook and LinkedIn, but already making (sound) waves in the business community.

Described as a mix of radio and podcast, Clubhouse occupies the white space between social media and broadcasting and is being accepted as a major channel across various industries, especially tech and entertainment.

Why you need to be on the Clubhouse app

There’s a reason podcasts are so popular at the moment – people want to take time away from the screen! With Clubhouse, you have the added possibility to interact. This is especially poignant for businesses as people are getting ‘zoom exhausted’. It’s a fresh way to engage, network and present opportunities through conversations. Bob Allyn from NPR put it nicely by saying “It’s as if your LinkedIn could talk.”

The popularity of audio content has been on the rise for quite some time, some of the advantages of an audio only platform include:

New kid on the block

Everyone is intrigued by a shiny new toy, especially in the tech and communications industry. It’s a whole new world for people and businesses to explore while it’s still an unsaturated market. The ‘invite-only’ aspect has also added to the excitement, the exclusivity of it all only makes people want in even more.

I think there is great potential for businesses who can cash in on the ‘hype’ of a new app; it can prove they’re relevant, modern and can adapt. Being present on the Clubhouse app while it’s still aloof increases your chance of being noticed and can be amplified across other channels.

The Clubhouse app has been dubbed as the FOMO app; if you’re not in the room in real time, you miss what’s happening. This is how it differs from radio and podcast; the engagement is live and it is not recorded. I think that this is a huge vantage point for businesses as they can work on building real relationships with real people.

There have been many instances where big names have just dropped into rooms, the most famous being Mark Zuckerberg, who dropped into ‘The Good Time Show’ to discuss futuristic technology for Facebook. This occurrence could only be reported on by those who were there in real time, leading people to spend more time on the app with the hopes of possibly hearing one of these impromptu and unfiltered chats.

Most rooms are conducted in an interview style, where ‘moderators’ control the narrative and open the floor to other speakers from the audience. I like to think of moderators as a cross between radio hosts and exam invigilators, as they facilitate the conversation and have the power to kick people out of the room if necessary! This set up is ideal for businesses. Rather than a one-man lecture or webinar which people can’t engage with, this style keeps people’s interest and has a level of professionalism that you just don’t get on similar platforms, such as Instagram Live.

Growing your network and building relationships

Arguably the easiest way to utilise Clubhouse, is by using it to grow your network. There are hundreds of clubs dedicated to networking and often host rooms for speed networking.

Some of the rooms I ventured into reminded me of business events but without the IRL crowds. It’s like putting on your headphones and entering a room with a big sign on the front declaring the subject of something you’re interested in and from there you’re reeled in audibly.

How to get started

I recently signed up to Bristol Creative Industries webinar: ‘Clubhouse as a Media Platform’ with Drew Benvie, and he shared some great tips for getting started and building a following on the app. Here are just a few points I took away:

Some great rooms that myself and the rest of team AMBITIOUS have been listening into are:

Two months ago, I had no idea what Clubhouse was and now not only do I use it regularly, I believe it is a revolutionary social media tool for businesses. I’m looking forward to seeing how it progresses in the future as it opens up to more people! 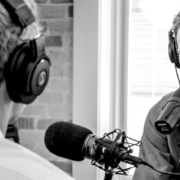 Thinking of starting a b2b podcast? Here’s 10 reasons why you should
0 replies

Why combine PR strategy with SEO?
Scroll to top