June went quicker than it came around, bringing with it a whole range of summer campaigns. Inflation went up, fuel went through the roof but some prices did manage to come down. Here we take a look at our favourite marketing and PR campaigns that have crossed our paths this month.

With 2022 seeing the humanistic approach and experience becoming of increasing importance post-covid, brands in both B2B and B2C markets are adapting their approaches to marketing. Experiential campaigns providing excitement for the senses or pulling on our emotional responses have dominated this month.

There’s a common theme we can all agree is a good one with Claire’s marketing picks this month. Ryan Reynolds, actor, producer, comedian, writer and businessman comes through in true Reynolds style in his latest adverts, from the production to the comedy. First, Reynold’s takes the mick out of the phoney-fathers-day-mush we commonly see and takes the brand to a genuine, relatable level for us all (not just the Dads) while simultaneously mocking the over-the-top displays of cocktail makers and mixologists. Just give us what we want!

Reynolds also shows us he’s not like other CEOs with his latest Mint Mobile advert by disagreeing with competitors’ actions, even implying they must hate their customers.

Not only reacting to inflation by lowering prices, a very humanistic approach, but calling out other big wireless companies (hidden in plain sight behind the fake brand ‘big wireless’) for the fact this isn’t their reaction to economic difficulty.

Somehow Ryan Reynolds consistently makes himself the most relatable guy on the planet despite being one of the highest-grossing film actors of all time.

This attack on ‘big wireless’ comes as part of a series. Here we see Satan taking a job at Big Wireless, for the joy of making people’s lives hell. Satan having a job with a network provider is about as realistic as the company but both are symbolic of real-life situations.

Ryan Reynolds is a master of communicating deep messaging through comedy and absolute tomfoolery. The other big, wireless, networks don’t care about you, they waste your money on marketing and laugh in the face of your suffering. While Mint Mobile (wholesomely brought to you by Ryan and his pals) is everything you’ve ever asked for.

‘The spirit of the NBA’ campaign

Hennesy has clearly been reading my blogs. Experiential marketing is everywhere with the iconic Cognac brand right now as they celebrate the 75th anniversary season of the NBA. 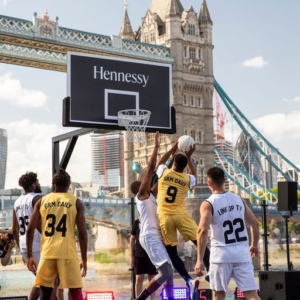 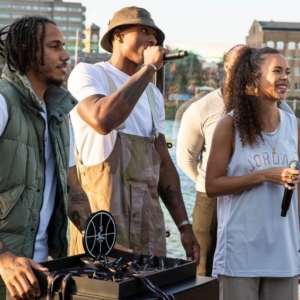 All of these experiential campaigns are tied together with an interactive globe on the campaign’s website page. Here you can move the 3D planet Earth around to see the worldwide reach of the campaign. With projects such as ‘Basketball taught me to work hard’ in South Africa and ‘NBA beyond the lines’ in Mexico.

When arriving in London, not only did they float down the Thames but they did so on the UK’s first floating basketball court. Rounding off three days of celebration of the sport. Dani Thornton from Kingdom Collective said, “we proudly joined the ‘PRs who flat things down the Thames’ club in the best way we know how…”. A perfect way to sum up the simple brilliance of the campaign.

After docking at Butler’s Wharf, Hennesy welcomes AJ Tracey to the stage. Paying homage to the strong historical link connecting basketball to Hip-Hop, and to the influence of both on British culture. 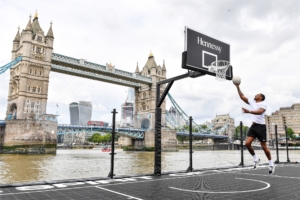 Complimented wonderfully by the collaboration with Lorenz Bäumer, jewellery designer, to create ‘one of the most original and technically challenging carafes ever made’. A decanter made from hand-faceted Baccarat crystal and shaped like a bouncy basketball. Filled with Paradis, a legend of Hennesy created in 1979.

Bäumer brings out the lining to create beauty and elegance from a bouncy ball. Both brands stand with a foot placed firmly in luxury and a foot firmly in the cool camp. A perfect collaboration of brands.”

Many of us will remember the 2006 campaign from Dove looking at photoshop in the media. In which, we see a woman transformed into a supermodel with the help of lighting, a makeup team and vigorous editing. I remember goosebump reactions and a small feeling of relief that these women aren’t actually real.

Today, we have moved forward, with some fashion brands banning photoshop, alongside some celebs ‘calling it out‘.

Looking at the younger generation, Gen-Z and Millennials, raised on social media. They have grown up, forming their opinion of themselves, no longer comparing their bodies to edited A-listers in magazines, but constant edited photos in their pocket of people just like them. With the introduction of filters by Snapchat in Jan 2015, the hours of photoshop could be condensed into a matter of seconds. Making unedited images a rarity online.

Dove chose not to sell their products in this campaign but to communicate their brand, sometimes a lot more effective. In this case, Dove positions itself as ‘woke’, caring and kind; appealing across generations as a skincare brand once again.

Suicide prevention charity CALM, has unveiled a powerful awareness campaign. this month that’s hard to ignore. Called The Last Photo, the campaign features the last images of people, all smiling, who were lost to suicide.

As part of the campaign going live photos were displayed on Monday and later in the week revealed to be among the last images taken of people who went on to die by suicide. It’s supported by practical advice, video, print and social.

The campaign shows those who are struggling with suicidal thoughts can appear happy and successful. It is a genuine reminder to check on the ones we love and help people recognise the signs of suicide and address the issue with their loved ones to help prevent it.

I liked how this combined really simple elements: a recognisable comedy character from the past (but who is still funny if you don’t know the original sketches) with a direct message about one action we can all take as individuals.

You can really see how this campaign will work across multiple channels.

Whether on TV or online, it’s likely you’ve encountered Burger King’s ‘Whopper to a Flame’ campaign. The campaign, comprised of three short films, use to show off the Whopper’s grilled taste.
The first of these films – ‘Breakup’ – shows an emotional man getting ready to burn his ex’s favourite jumper, and the second, ‘Backyard’, show a group of friends running from flying patties. The third short film is scheduled for later on this year but will centre on a pair of hikers being hit by flying burgers as they huddle for warmth around a fire.
I was inspired by how the effectiveness of this campaign was – it was concise, and even though we don’t have to worry about being ambushed by flying patties in our own lives, we’re still drawn in, and eager to try the flame-grilled Whopper.

When you think of Branson, you don’t think of a brand that can bring tears to your eye. Unless maybe you really love, or in fact hate pickled vegetable-based condiments. However, regardless of your view on pickles, this advert really does pull on the heartstrings.

It transforms a forgettable, old-fashioned brand into one that evokes emotions we have all felt before: anticipation, nostalgia, gratitude and being excited and homesick all at the same time. It depicts a young girl, who has just started a new job in the big city and is narrated through a phone call with a worried but proud mother, who ends up posting a jar of Branston to remind her of home.

The ad is not new, it’s been around since 2020 but it still plays on prime-time television slots, which speaks to its timeless nature. It’s a personal favourite, which I saw the first time for a while the other day, and I also happen to be very much on the love side of the pickle spectrum (although no tears as of yet).

An emotional lineup for June, with July creeping in we, are excited to see what marketing campaigns catch our eye this month. We’re always interested to hear what marketing has resonated with you recently, so drop us an email [email protected].

Future proofing business during a recession