Having so much to choose from, picking our highlights has been difficult this month. April saw Easter and April Fools Day spark up countless campaigns…

Elon Musk is trending on Twitter, about Twitter. In response to the media frenzy, everyone searching for the latest twitter-news, Specsavers decided it was the perfect time to remind us of their buy one get one free offer.

Writing “Elon Musk could’ve bought 65,217,391,304 pairs of £69 glasses. And got another 65,217,391,304 pairs free.” A fabulous piece of reactive content, highlighting the amazing value offer that has the potential for over 65 million pairs of completely free glasses! “And get 65 million pairs free” sounds a lot more exciting than “get another one free” which we hear so often.

Specsavers have tweeted Musk before, along with Richard Branson, stating whoever replied first got free glasses for life. Jumping on the back of their race to space and inventing a race to free space glasses.

Being April, I had to choose an April Fools campaign. This year, Little Tikes caught my eye with their Cozy Cab stunt, whereby they created a fake taxi service, much like Uber, that uses a family-sized Cozy Coupe toy car to save money on petrol.

Not only did this one check the comedy box, it was clever, making light of the current cost of petrol crisis.

The joke was well-received and despite it not actually being a real product – people really want to see adult-sized Cozy Coupes!

In anticipation for Earth Day, Ecologi unveiled their billboards that suck. Most climate ads have been ‘sucking’ in the negative sense, with talks of greenwashing hitting almost every media outlet and the majority of consumers eye-rolling a the sight of more branded green spaces.

However, Ecologi’s groundbreaking billboard literally sucks emissions up. Using PURETi, a material that breaks down harmful emissions using natural sunlight. Removing tonnes of CO2 emissions over the 6 weeks the advertisement is in place. Not only creating positive climate impact through the period of the campaign but introducing the public to the available technology, at a time when the climate is even more of a popular discussion (earth day), putting pressure going forward for more companies to use emission-sucking materials for their marketing.

Ecologi reminded us what’s important when it comes to climate change. It’s not talking about it, it’s not about a catchy billboard (even though they did too that with their pun) or the imagery, it’s about real action.

This month, for me, it has to be Ikea’s flat pack easter bunny.

They are always quick off the mark, simple and there is always humour. It’s always memorable, but for the right reasons.

Elon Musk buying up almost 10% of Twitter shares incited a media storm around many a PR professional’s favourite social media platform. It was unusual to see Musk not lean on his brand of emotionless-super power-villain and instead, a man of the people, immediately putting out a poll and inciting a debate if there should be an edit button. 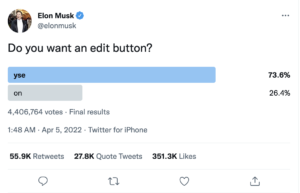 The people spoke, cheered, threw their hats in the air for Elon’s edit button and so began the Elon Musk x Twitter brand collab super fans.

The CEO of Twitter announced Musk would be joining the board. Arguably giving the mega multi-billionaire more power in global society wouldn’t usually go down as such a treat. Elon’s PR team are sure to be patting themselves on the back whilst Twitter has no choice but to ride on the coattails of Musk’s new venture.

The Dyson Zone is so futuristic, that it had some wondering if it was even real.

Dyson’s latest product is a piece of wearable technology that promises to cut pollution out of your life while on the move, tackling both noise and air pollution. It’s a pair of noise-cancelling headphones that also have a mouthpiece, which is designed to filter and purify the air that you breathe. There isn’t a product like this out there on the market and the design and aesthetic is pretty shocking.

Dyson knew this. They knew the market probably wasn’t quite ready for the Zone. So, they only released very limited info about the product, with a few pieces of tactical marketing to give people a taste of the product. They also cleverly released the information the day before April fools, upping the debate about whether the product was in fact real.

The media lapped this up and the product got huge coverage, without having to do much at all. Many publications simply published because of the fact they didn’t know if the product was real or not, which only added to the conversation and built up the intrigue.

Such as Aldi’s fake launch of Aldiair. Aldi chose to take on Ryanair in a social media battle, with both brands performing exceptionally well online at the moment. Walkers released their ‘bread sized crisps‘ as an April-fools gag, which backfired when customers were outraged to hear their new favourite thing wasn’t even real.

In the fashion world, we saw several releases from Nike, with light colourway trainers, in time for Spring/Summer 2022. Announcing, this month, another collaboration with OffWhite, one of many since the passing of Virgil Ablo which is set to be released in May.

With seasonal products, always comes incredible window displays. Some of my all-time favourite displays are ‘Fabergé easter at Harrods’ window displays, from 2015  and 2014. Fabergé and Harrods included an interactive marketing strategy with their 2015 designer egg hunt.

Insurance company A-Plan, hosted a competition between staff to create a seasonal window display. Runner-up Abi Brinkhurt’s entry was nothing short of a car-crash victory.

PR apprenticeship and Kickstarter with AMBITIOUS